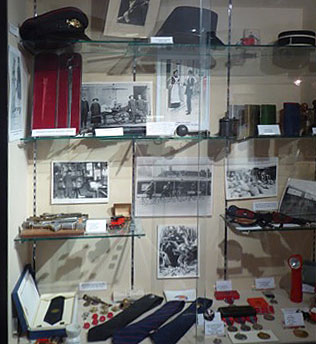 Our new display celebrates the various activities of the Postal Worker with particular reference to Wartime and long service. A variety of articles associated with uniforms and equipment used by Postal Workers over the last 100 years and more include hats, badges and buttons, armbands, and ties. Older items such as a fancy pair of scissors for cutting up the sheets of stamps before the days of perforations, a spring-operated parcel scale, a fine photograph of postmen on five cycles of the penny farthing type with one large wheel and smaller wheels at the four corners (a penny and 4 farthings perhaps), and a key on a heavy chain for opening the older letter boxes. 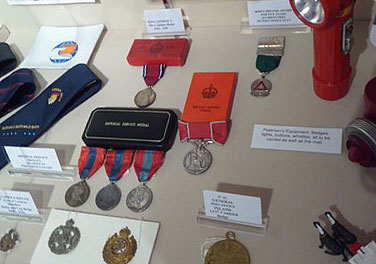 he display includes various medals, including one for a Letter Carrier of the Victorian Period, a Silver Jubilee Medal (1910-1935), a British Empire Medal, Imperial Service Medals and a safe driving medal issued by ROSPA in the 1950’s. Cap and lapel badges issued to members of the Post Office Rifles from the 1908 to 1922, record campaigns in Egypt in 1882 and South Africa from 1899 to 1902.

Other exhibits include hand and cycle torches from different periods, a postman’s whistle and a tube train hanging knob issued to Postmen for their protection during the black-out of the Second World War,  some lead bag seals with examples of pliers used to seal the bags.

Money Boxes issued by the Post Office Savings Bank, in various colours and patterns, and one of these is very early, there is a stand for holding a number of hand stamps, and a Datapost ash tray.

This new display  coincides with the move of the Bath Post Office from the ground floor at 27 Northgate Street to upstairs in W.H. Smith in Union Street on 4th July 2019. Following the move, tablets in Memory of Postal Staff who lost their lives in the two World Wars have been moved into the Bath Postal Museum. The tablet for the First World War records the names of 4 postal workers who lost their lives. It is planned that these tablets will be re-dedicated in due course.